There’s an inevitability, irony and some might say justice when an individual claims IP protection and, in particular, says “…copyright is for losers…” and, nevertheless, goes on to seek the protection of the courts for his brand, wins, tries clever merchandisingto leverage his good fortune and falls flat on his face. The individual in question was none other than street artist anti-hero Banksy. What a mess. How did this happen?

Making an exhibition of himself

An Italian company put on an exhibition of Banksy’s artworks in Milan’s Mudec Museum in 2018. The works on display were original. The vast array of merchandising accompanying the exhibition was the problem. It incorporated images of Banksy’s art and so enraged Banksy his handling service, Pest Control, acted in Italy toput a stop to it.In January 2019 the action was successful and haltedthe reproduction, via merchandise,of Banksy’s branded art.Pest Control had successfully enforced trademark rights over the Banksy name in respect of all but the promotional material for the exhibition which was deemed acceptable and necessary to describe the show.  Not bad going for an artist allegedly so openly hostile to intellectual property law.

Man, with a plan

The case ably demonstrated a weak point in the Banksy marketing strategy. Yes – there must be one – how else do you get that well known and wealthy? The frailty being if he wanted to keep enforcing his trademarks and avoid them being cancelled through lack of use, he ought to start using them and, horror of horrors, for such an anti-establishment figure, produce his own branded merchandise!

Most artists aren’t like Banksy. They’re not caught on the horns of a political philosophical dilemma. They quite like idea of IP law protecting their efforts and creativity and enabling them to be suitably rewarded for it. They might not think of themselves as entrepreneurs but see no evil in profiting from their talent and there are always charitable donations for those who can’t sleep at night.But Banksy isn’t most artists. He’s anti-consumerist and, let’s face it, doesn’t even buy his own canvasses. He prefers to graffiti other people’s walls. Therein lies his enviable public appeal.

Not laughing all the way to the Banksy

What happened next is truly fascinating. Encouraged to enter the world of merchandising, Banksy does so with a twist. He sets up a physical gift shop in Croydon called Gross Domestic Product to flog, online only, what a later appeal court described as “impractical and offensive” merchandise. We’re talking things like glitter-balls made from riot Police helmets, that sort of thing.

Banksy’s Italian court win was overturned this month by a ruling of the EUIPO Cancellation Division. Primarily because Banksy’s character-defining anonymity meant:

“…he cannotbe identified as the unquestionable owner of such works as his identity is hidden; it further cannot be established without question that the artist holds the copyright to agraffiti.”

Moreover, they ruled his initial action had been brought in bad faith and undermined by his gift shop concept.This month, The Guardian reported the judges saying:

“…his intention was not to use the mark as a trademark to commercialise goods…but only to circumnavigate the law. These actions are inconsistent with honest practices.”

So, it seems, Banksy’s facing a legal wall of possible trademark disputes. Might as well paint something thought-provoking on it whilst he’s there. 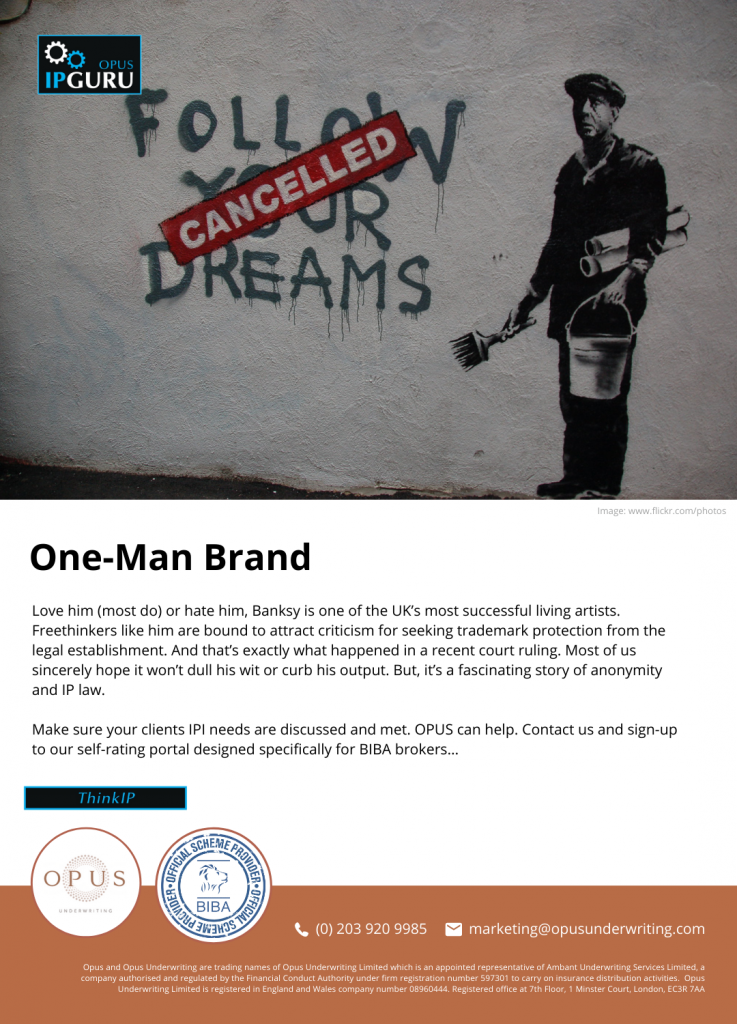