“You just pick up a chord, go twang, and you’ve got music.”

The words of Simon Richie. Or Sid Vicious to me and you, the late departed iconic front man of The Sex Pistols. Curl your lip, gel your hair and be generally obnoxious and you could even start a cultural movement. Punk was born in the mid-1970’s and now, looking in the rear-view mirror, The Sex Pistols were at the core of that movement. That is their importance culturally and so, many years later, comes the opportunity to exploit past fame for hard cash. Handy if you’re hard-up. Their story is fascinating, their music, well…let’s just say it screams of its time.

They weren’t around for long. Formed in 1975 and splitting in 1978 with only one studio album (yes – you can remember its title). Vicious was dead a year after the split, having over-dosed on drugs adding yet more drama to a music revolution. For many, The Pistols were and are the face of 1970’s Punk Rock culture. But who was the face of the band, why has that caused so much disharmony and how did they end up in court last month fighting it out?

Back to the music. Quite possibly it’s the low output over such a short period of time that makes the tracks released so evocative of the era. And, therefore, in demand whenever a filmmaker wants to take us back to that point in time. What a band needs to monetise such opportunities is a licensing agreement. Intellectual property rights, yet again, hove into view.

In this instance by way of a “Band Members Agreement” (BMA) signed in 1998.  The BMA was signed by the remaining band members, Paul Cook, Steve Jones, John Lydon AKA Johnny Rotten, and the estate of Sid Vicious. It appears that Steve Jones and Paul Cook wanted to allow Pistols songs to be used in a Disney six-part TV series directed by Danny Boyle, based on Steve Jones’s memoir; “Lonely Boy: Tales from a Sex Pistol”.

Rotten said he’d not been consulted, wanted nothing to do with the project and tried to stop the music being used. Jones and Cook said the 1998 BMA allowed licensing decisions to be taken on a majority-vote basis and they were supported by original bass guitarist Glen Matlock and the Vicious estate. Cook and Jones sued Rotten. Into the High Court they went.

Rotten claimed his former bandmates were estopped from relying on the majority-vote clause in the BMA. In his defence, he threw all three ‘flavours’ of estoppel at the claimants: being:

The judge considered this estoppel blunderbuss and found a…

“long catalogue of incidents said to demonstrate assumptions and representations” but held none of them could give rise to estoppel. One by one, he dismissed their application on the facts of the case. Rotten’s defence failed. The BMA was sound. Jones and Cook were free to licence their music to Disney. The series is scheduled to air next year.

Rather than there being an outbreak of harmony from the band members post decision, Lydon kicked-off from where he left his evidence to the court likening the BMA to…

“becoming a prisoner of a hostile majority”…and…”slave labour”.

Following the judgment, in a statement to press, he said the decision is “dumbfounding” since he believes himself to be…

“the lead singer and songwriter, front man, image, the lot…” of the band.

So, forty years on and as artistic differences go – there’s still a bit of a rift!

Note to young musicians in bands

Enjoy your music, odds are you’ll probably split up. Understand your BMA, remain friends and have an eye on the future. 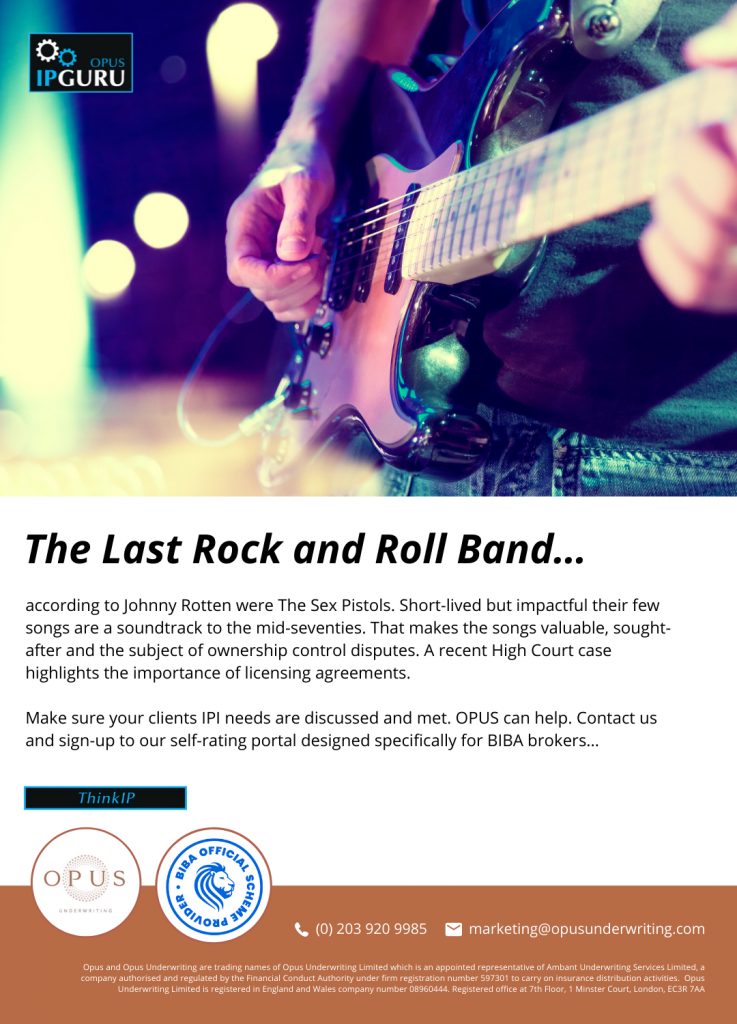 Five get into a legal disputenews