Not so long ago in a world not so far, far away we might have met our life partner down the pub, at a party (remember those?) or at work. That’s now an era viewed through misty eyes and about as relevant to modern relationship-making as an Enid Blyton-style, gingham-blanket, ginger-beer-swilling picnic is to contemporary casual dining.  We’ve all moved on, or in the modern vernacular, ‘jogged-on’.

We now ‘swipe’, ‘upload’, ‘like’, ‘chat’ (on-line – obviously – not to face-to-face) and rely on technology and dating Apps to deliver us from loneliness.  If you thought this modern dating process was a bit tricky to navigate, you’d be right. What you might not realise is it’s equally painful and fraught with difficulties for the technologies, Apps and business models peddling the ‘hook-up’ software you load onto your iPhone.  Intellectual property disputes abound in this arena, the nature of which might surprise you as much as an admirer swiping-right on your dating post.

Who swiped the swipe? That was the essence of the legal IP clash between Bumble and Tinder (owned by Match). Bumble, the women-first social networking platform, was founded by its CEO and ex-Tinder executive, Whitney Wolfe Herd in 2014.  Without question the first iterations of the Apps were similar and described at the time of the initial lawsuit, thus:

“You have a photo, a description, and then with a flick of the finger, you decide yes or no…[Bumble] was exactly like Tinder except women had to message first.”

Animosity between Tinder and Bumble was not helped by Ms Herd Wolfe being the ex-partner of a Tinder co-founder and her setting up Bumble after a messy sexual harassment allegation-fuelled breakup.

Tinder claimed they owned and had patented the ‘swipe’ feature. Bumble said patents are supposed to cover inventions not abstract ideas. The swipe feature, said Bumble, wasn’t patentable. In truth, in the Internet era, an abstract idea can be patentable if it is tied to an existing technology. Some clarity was needed, and it came.

To give it it’s full title Alice Corp. v. CLS Bank International 2014. This Supreme Court ruling said that if you take an abstract idea and just propose using a computer or the Internet to make it happen, it will still be an abstract idea and not patentable. You must add something more and that’s the difficult bit both to do and to prove one way or the other.

Perhaps unsurprisingly, given the complexities and uncertainties highlighted by Alice, Match Group and Bumble settled their lawsuit in June 2020. Worth noting that Match Group tried to buy Bumble on more than one occasion, but its attentions as a suitor were rebuffed. Alongside Tinder, the Match Group also own Match, OkCupid, Hinge, PlentyOfFish and many other similar brands. Like any market brand aggregator and leader, one assumes they would like to keep it that way.

If not a swipe, then an algorithm

There are many Apps claiming special algorithms that connect like-minded lonely folk. Can such a gizmo that determines compatibility, be patentable?

Filed in the name of love

In 2004 eHarmony filed a patent for its unique compatibility matching system. More precisely for a:

“method and system for identifying people who are likely to have a successful relationship.”

But only this month, in New York, a federal judge said a similar patent filing by Apps SCRUFF and Jack’d was not valid. Why?

Possibly the best explanation was laid down by Judge Woods last year in connection with a device using a matchmaking algorithm that required the user to answer a series of questions, their answers matched with data of corresponding users of a similar device to calculate a degree of compatibility between the two users. The court said the idea of human compatibility and matchmaking is abstract. Moreover:

“…it is certainly not novel and has been performed by humans for a very long time.”

The court did not accept that humans are only capable of binary matchmaking. And processing a series of mathematical calculations based on selected information and then presenting the results does not demonstrate a “transformation” in IP law allowing it to be patented.

Dumped by the courts

There’s money in relationships, always has been and probably always will be. Despite the sharp-elbowed tech dating platforms trying to signify and protect uniqueness, the courts have pushed back telling them their ideas remain abstract, they are not novel and lack the transformative X-factor for a patent.

British Philosopher Alain de Botton is forthright in his essay printed in the New York Times in 2016, teasingly entitled:

“Why you will marry the wrong person”

Ask yourself when the 8m a-year dating App users in the UK are most likely to pick up their device to find love on-line and then consider De Botton’s killer observation:

“No one can be in an optimal frame of mind to choose a partner when remaining single feels unbearable”.

Let’s give the last word to 16th century ‘smoothie’ John Donne. Who can forget the school day teaching and bizarre metaphysical love symbolism of The Flea:

“…It sucked me first, and now sucks thee,

And in this flea our two bloods mingled be;…”

With chat-up lines this good, leave digital-dating wizardry for the birds. 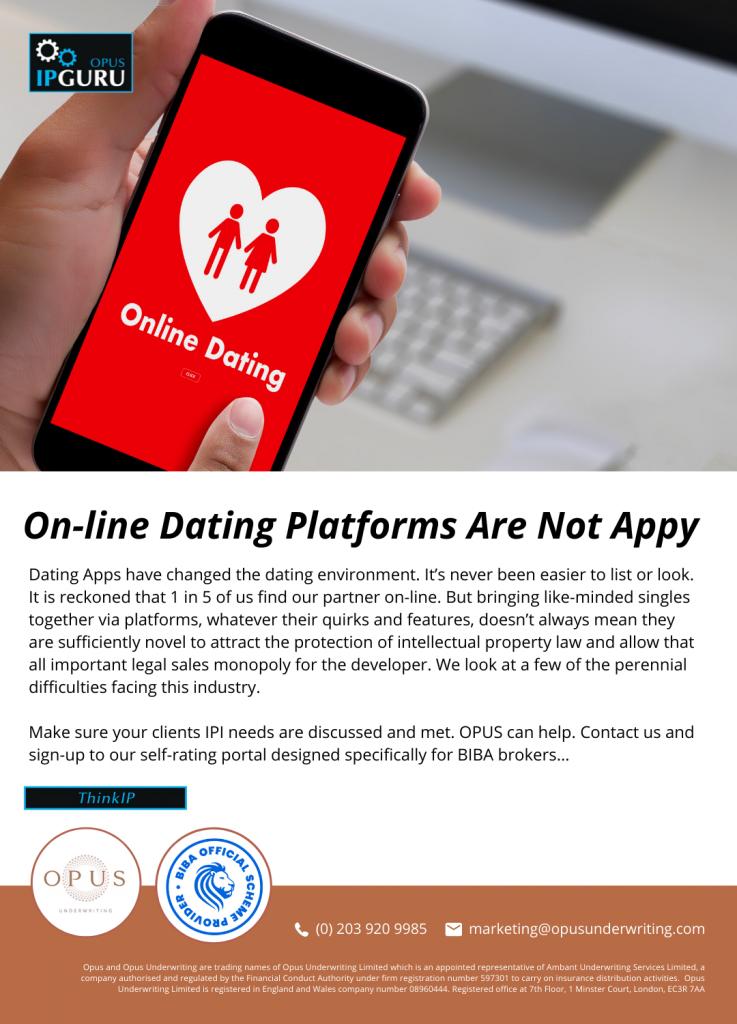