Quite what the late, great, transatlantic cultural commentator and messenger Alastair Cooke would have written about the recently resolved dispute between Meghan Markle and the publication of extracts from her letter to her father, is anyone’s guess. Sir Alastair may have said nothing, seeing it as merely ‘tabloid froth’. We will never know.

What we do know is that a private letter written by Meghan was published in part by Associated Newspapers Ltd. (ANL), AKA the Daily Mail Group, and it captured the public imagination offering an insight into the private relationship between Meghan and her father. It sold newspapers, was click-bait heaven, expended much TV airtime, and whetted the appetite of Royal watchers and commentators around the world for yet more revelations. Fascinating as that is, but lost in the journalistic spume, was the fact the dispute was, at its core, one of intellectual property.

The Duchess of Sussex wrote a letter to her father, Thomas, in August 2018. How she wrote it, and possible third-party involvement was important. She drafted it initially on her iPhone and shared that draft with Prince Harry and senior Kensington Palace aide and communications secretary, Jason Knauf. Thereafter, once the draft was settled, she transcribed it by hand to become that letter sent to her dad. The letter, or parts of it, got into the hands of ANL. They published five articles that included 88 quotations from the letter in February 2019. Meghan sued ANL. When legal papers were filed the claims were for:

One year on and first-up for determination by the court was the question of privacy. The judge said the Duchess had a reasonable expectation the contents of her letter to her father remained private. What ANL published interfered with that expectation and the partial defence put forward by them that the article was correcting previously published inaccuracies in another journal, cut no ice. The judge said of the letter:

“…it was a personal and private letter” and,

“…taken as a whole the disclosures were manifestly excessive and hence unlawful.”

Summary judgment on privacy secured, the copyright infringement claim was not quite so straightforward.

The claim required answers to the following three questions:

On the first point, the judge concluded the electronic draft and the final letter:

“…is and would inevitably be held to be the product of intellectual creativity sufficient to render it original in the relevant sense and to confer copyright to its author or authors.”

Secondly, the ANL articles “reproduced a substantial part of the content” of the letter and constituted infringement.

One matter had to go back to court for assessment and argument. That concerned the ownership of copyright. ANL claimed joint copyright existed between the Duchess and her former communications secretary.

Fast forward to May 2021. Meghan claimed she wrote the letter but was another hand at play? ANL claimed there were many electronic drafts that went through the hands of others such as Knauf who influenced the final draft to such a degree he was co-author meaning its copyright belonged to the Crown for whom he worked. Knauf denied this saying:

“…it was the Duchess’s letter alone.”  His contribution was ideas not wording.

The court agreed and Meghan Markle won the final part of her claim. It was her letter and her sole copyright. Damages to be assessed at future hearings. An appeal awaits.

Amid a complex family feud played out to a baying public, served up by the media over many months and through several court hearings, intellectual property law delivered a decision of clarity and precision.

Now, that really is something to write home about. 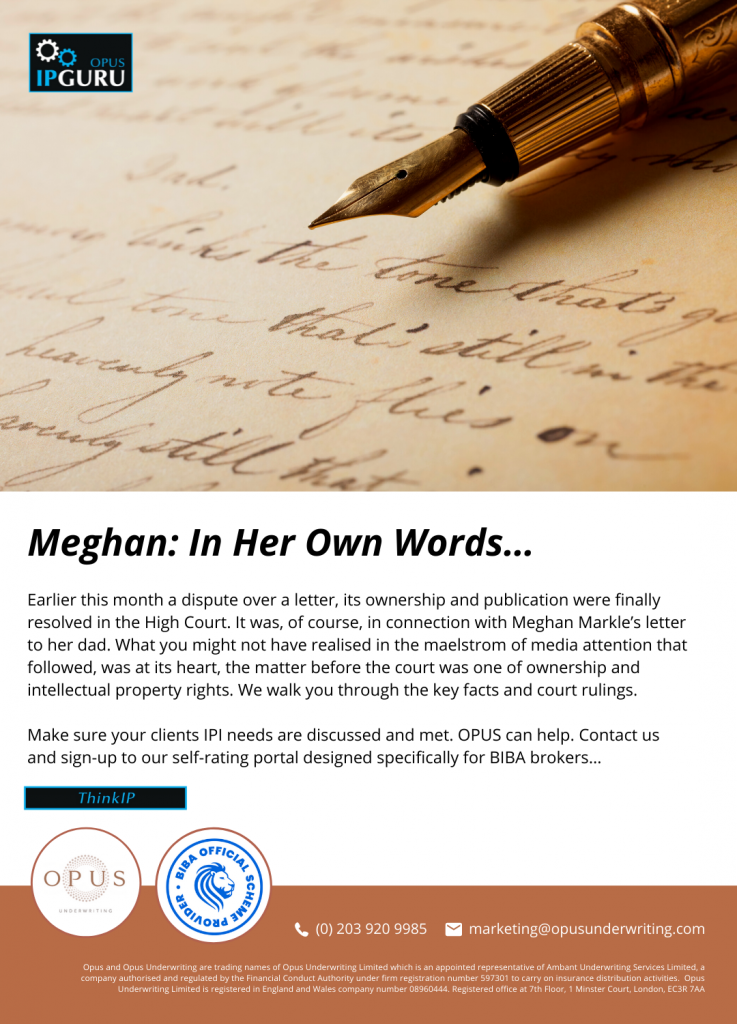