This is Andy Warhol and it’s take one

With apologies to David Bowie and fans of his 1971 album Hunky Dory but who could forget the opening line to the track Andy Warhol. That’s your earworm for the day. More to the point, who could forget Andy Warhol the leading light of pop art. And who could forget his most famous creations from Campbell’s soup cans to his Marilyn Diptych? But the subject matter for today is Andy Warhol’s image of ‘the artist formally known as Prince’, or just ‘Prince’ if that’s easier, which of course it is. Let’s side-step that neat bit of re-branding (perhaps worthy of an article in itself) and focus on the intellectual property lawsuit at hand.

Our story begins in 1981. Celebrity photographer Lynn Goldsmith took a series of 23 portrait photographs of Prince, before his pomp and fame. They were notable, critics said, for portraying the singer as a vulnerable and uncomfortable person. In 1984, Goldsmith licensed one of the photographs to Vanity Fair magazine. The photograph was to be used as an artist’s reference to facilitate the creation of a work of art based on the photograph and for that illustration to be published in the November 1984 edition of the magazine. The artist commissioned was Andy Warhol. Goldsmith was attributed as the photographer behind the original ‘source’ image.

Warhol went on to create 15 additional images based on the Prince photograph which became known as the Prince Series. Warhol died in 1987. Between 1993 and 2004 the surviving commercial machine of The Warhol Foundation sold or transferred custody of 12 of the 15 images. We can safely assume for a fair bit of cash.

In 2016 Prince died. As a tribute, Conde Nast (owner of Vanity Fair) published a Prince Series Warhol on the cover attributed solely to the Warhol Foundation. By this act, Goldsmith first became aware of the Prince Series and alleged the Foundation had infringed her copyright and registered her originally licensed photograph with the Copyright Office. The Foundation reacted by suing Goldsmith for a declaratory judgment of non-infringement or, in the alternative, fair use of Goldsmith’s photograph.

In simple terms, fair use of an image can defeat a copyright infringement claim if it can be argued the original image has been transformed into something quite different from the original. The first divisional court to hear the case considered whether Warhol’s image of Prince was transformative? As one sharp commentator noted, the court was going to decide when a Warhol becomes a Warhol.

The court as art critic

The court reflected on Goldsmith’s image of a “vulnerable” monochrome Prince turning into a larger-than-life iconic figure at the hand of Warhol and his signature poster-bright screen prints in contrasting colour palette. Warhol’s image of Prince became instantly recognisable as…er…a Warhol. The court said the image was not just a Warhol but had been transformed into something it originally was not. In essence it was an image of Prince that had become a Warhol image of Prince and, by degree, was more Warhol than Prince for the purposes of fair use and the transformative value defence. Not easy to follow is it? And nor was it by the appeal court.

On appeal, the higher court was unimpressed with the district judge’s assumed role of art critic trying to delve into the intent and meaning or art. Moving to firmer legal ground the court said:

“…judges are typically unsuited to make aesthetic judgements…rather [they] should examine whether the secondary work’s use of its source material is in service of a ‘fundamentally different and new’ artistic purpose and character, such that the secondary work stands apart from the ‘raw material’ used to create it.”

The court concluded that when viewed next to Goldsmith’s original photograph, Warhol’s Prince Series was not “transformative”. The fact it became immediately recognisable as a Warhol was irrelevant. Moreover, the court warned of creating a “celebrity-plagiarist privilege” if a distinctive artistic style was to allow such an artist to pilfer “the creative labour of others.”

Not exactly a ringing endorsement for stylistic artists like Warhol. The law did not allow Warhol to claim Goldsmith’s image as his own by giving it a Warhol makeover. Warhol’s use of Goldsmith’s photograph was not fair use, and she was entitled to damages for infringement.

If Andy Warhol was alive today, he would surely smile at the artistic irony of the ruling. The essence of the pop art culture he was so instrumental in creating, was built around the borrowing of images from others.  In his own words:

“Art is what you can get away with.” 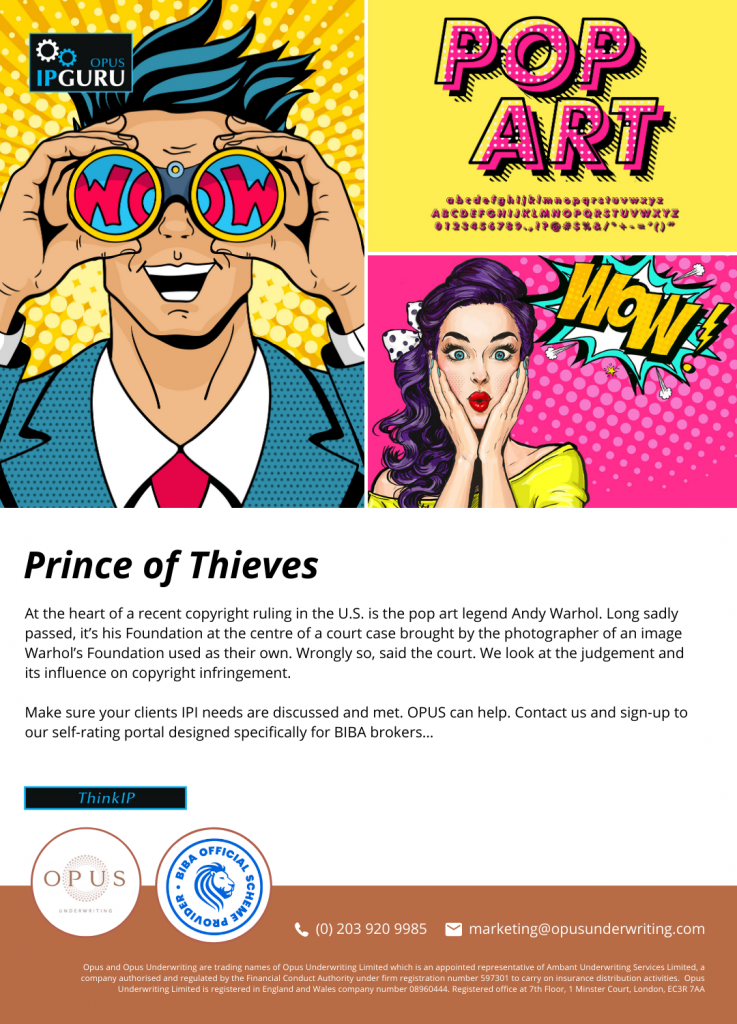