Covid-19 lockdown go-to and Netflix smash-hit “Tiger King” is perhaps an unlikely subject for an intellectual property newsfeed. Or is it? For some time now we’ve been proclaiming that IP is everywhere if you know where and what to look for. Your evening TV entertainment is no different. Here’s how.
Within the series (around episode four mostly) a raging trademark and copyright dispute unfolds. It’s not a side issue either, it’s pretty much at the heart of matters. Such is the excitement for trademark professionals they may be forgiven for spilling their TV dinners.

The protagonists
Enter a chap called Joseph Maldonado-Passage, aka Joe Schreibvogel and aka Joe Exotic the latter being his show name the former cribbed from court documents. Joe is the glitzy mullet-haired, red-neck, gay owner of a roadside zoo in Oklahoma called “Greater Wynnewood Exotic Animal Memorial Park” specialising in big cats and doubling as a travelling magic show…obviously. He breeds tigers for profit. Private tiger ownership in the States being more popular than anyone in the home counties might imagine. That’s America for you and in large part, the attraction of the series. Joe’s arch-rival is one Carole Baskin owner of “Big Cat Rescue” in Tampa. Remember that business name – it’s important to the IP story. Ms Baskin runs an animal sanctuary for big cats claiming to be their saviour whilst Joe is tagged an animal abuser. The seeds of a decade-long feud are cast.
Baskin sets out to ruin Exotic and put him out of business. Joe retaliates and an IP dispute emerges from the enmity. In fairness, so too does a murder plot but that’s not a tale for this website – watch the series.

The legal issues
Tiger King can be forgiven for conflating the separate matters of copyrights and trademarks. Taking issue with an entertainment company over such legal complications would be picky in the extreme. Nonetheless, distinctions need to be drawn for our readership.

Case one: Trademark
In Baskin’s quest to make selling exotic cats in the States illegal, she becomes a thorn in Joe Exotic’s side. Joe retaliates, rather unexpectedly, by naming his travelling show “Big Cat Rescue Entertainment”. Baskin had trademarked her logo including the words “Big Cat Rescue” and Joe’s new logo looked suspiciously similar. Baskin sues Exotic in case number one in 2011 for trademark violation of the logo registered in 2004 nine years after she commenced trading under that name. It now gets technically interesting. Baskin didn’t have a trademark on the mark i.e. the words used together “Big Cat Rescue” but claimed common law protection of the words through usage and for this not to be upheld, she said, would confuse the public. Case number one never gets to trial and Joe gives up, agreeing to judgment being entered against him by the court.

Cases two and three: Copyright
Perhaps feeling she has Exotic on the run, Baskin sues him for copyright violation in 2011 into early 2012. Copyright is designed to protect authorship of photos, videos, films songs, etc. and ownership is automatic. Official copyright registration can be bought and filed; it wasn’t in this case.
Altogether easier to prove than trademark violations, Baskin claimed she had copyright on some photos and videos Exotic mischievously posted on Facebook harassing Baskin. Exotic admitted the posts and thereby violation of Baskin’s copyright. He faced modest damages of $75,000 for both copyright cases.
In the series it wrongly hinted Exotic lost all his actions and defences. That’s not quite true. He lost his counter claims. He quite probably ran out of money to keep funding the litigation.

Tiger King to Tiger Prawn
The sting was in the tail of the 2012 final judgment – the copyright case number one was decided and damages were awarded against Exotic of $953,000. Ouch! Baskin, using IP laws and enforcing a trademark, very effectively put Exotic out of business. Had Joe a case with reasonable prospects and Intellectual property insurance (IPI) who knows, the outcome might have been different. We can but speculate.

Trademark Opportunists
It’s an interesting postscript to note the show’s very popularity spawned several trademark applications as at April this year. From Tiger King toys and Exotic’s signature baseball hat to Halloween costumes…who wouldn’t want one of those this year. It appears none of the applications are from Mr Exotic himself. Maybe that’s no surprise given Exotic was sentenced to 22 years imprisonment in 2019 for his part in a plot to murder Baskin.
Now do you want to watch the series…? 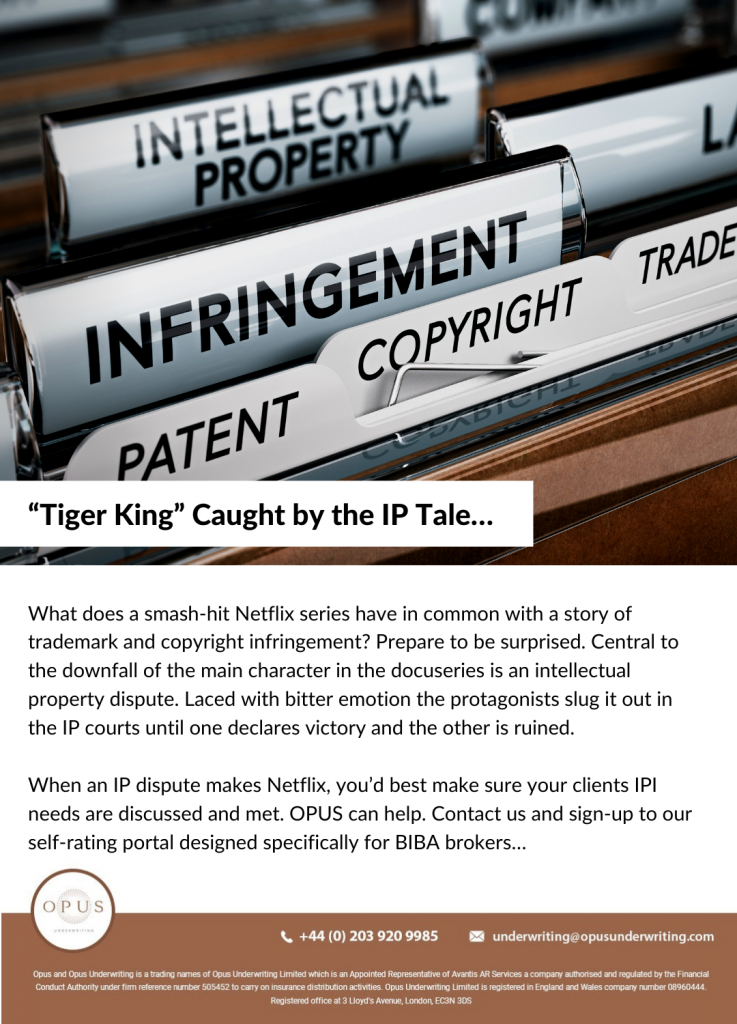