Aggressive, arrogant, and alarming. Just three words used recently to describe the EU as it thrashed around trying to find a solution to a problem of its own making. That being; glacier-paced vaccine roll-out for all the world to see. How embarrassing. First it was clumsy ‘missteps’ attempting to interfere in international vaccine distribution channels emanating from inside the EU and then Ireland. Oh dear, Ireland, that really didn’t go well at all. And, after all of this, if you were watching closely, came the intellectual property grenade, pin-out, rolling to a stop at the feet of ‘Big Pharma’.

Lobbed in by a left-leaning commentator or two with, arguably, as much knowledge of patent economics as some European heads of state demonstrated over vaccine efficacy. I refer, of course, to calls for patent seizure and open-market release of vaccine formulas. That way, some argue, the greater the number of vaccine manufacturers the wider and more equitable is global distribution.  Really? That needs looking at more closely. It sounds too good to be true.

Going equipped for state-sponsored theft of another’s intellectual property requires a tool kit. Let’s take the UK and the US as examples given the terrific progress, they’ve both made, in promoting the creation of an effective vaccine.

Under UK patent law the government has the power to authorise an act that would otherwise infringe a patent, without consent of the owner. So, in theory, it could authorise the use of a patented vaccine formula by a third-party producer if it felt the matter was an emergency. The requirement to vaccinate the world against Covid-19 certainly fits the “emergency” criterion. There’s the theory and then there’s the practice.

Crucially, it’s the government who decides whether to step in and perhaps unsurprisingly the provision is rarely used. To disrupt a patent is no small matter since the ripples from such a heavy-handed act would be far-reaching and disturbing for many patent owners potentially undermining the entire principle of lawful exploitation thereby risking further investment, creativity and ambition.

And the final rub. Even if Crown Use was invoked, the government would be required in law to provide reasonable compensation to the patent owners.

In the longer term, at least three years after the grant of a patent, if distribution remained woefully inadequate there would be the option for the government to grant a compulsory licence to a third-party manufacturer applying for the same. Problems are likely to occur when the patent owner chooses, as is their right, to oppose the application and the haggling required to agree a reasonable period and reasonable terms even if granted. That could be a drawn-out legal nightmare but would require a pharmaceutical defendant unafraid of negative PR. There aren’t many of those.

Not a whiff of pompous labelling state-side, the applicable IP law is simply known as “march-in” rights. A refreshingly accurate description. Here’s what they can do.

Like the UK, US patents can be seized for public health reasons but only where the (vaccine) invention is created with the assistance of public funding. That test being met with both Pfizer and Moderna. The US government has two legal tools at its disposal.

A 1980 intellectual property law permitting ‘march-in’ rights to a government requiring the patent holder to grant others a licence to the invention (vaccine formula) when “health or safety needs” are not being “reasonably satisfied”. The tool exists but the US government has been loath to use it. The question is: at what point in time would or could it be used with the current Covid-19 vaccination programme?

Not such a catchy title but this law is an equally valid alternative action open to the US government. In simple terms it allows the government to make or use any invention without the patentee’s permission if it gives the owner “reasonable” compensation.

There you have it. Patent seizure rights do exist but are rarely used. But look through the fog. They are regularly used – as a deterrent. They effectively deter over-pricing, delay, and ‘Big Pharma’ abuse. That’s the thing about a nuclear option. It’s having the button to press – not actually doing it.

Were it ever pressed, as one IP commentator and practitioner put it: such an act would have… “a chilling effect on biopharmaceutical innovation right when such innovation is so sorely needed.”

It’s wise to keep an eye on the crisis of the future and put that pin back into the grenade. 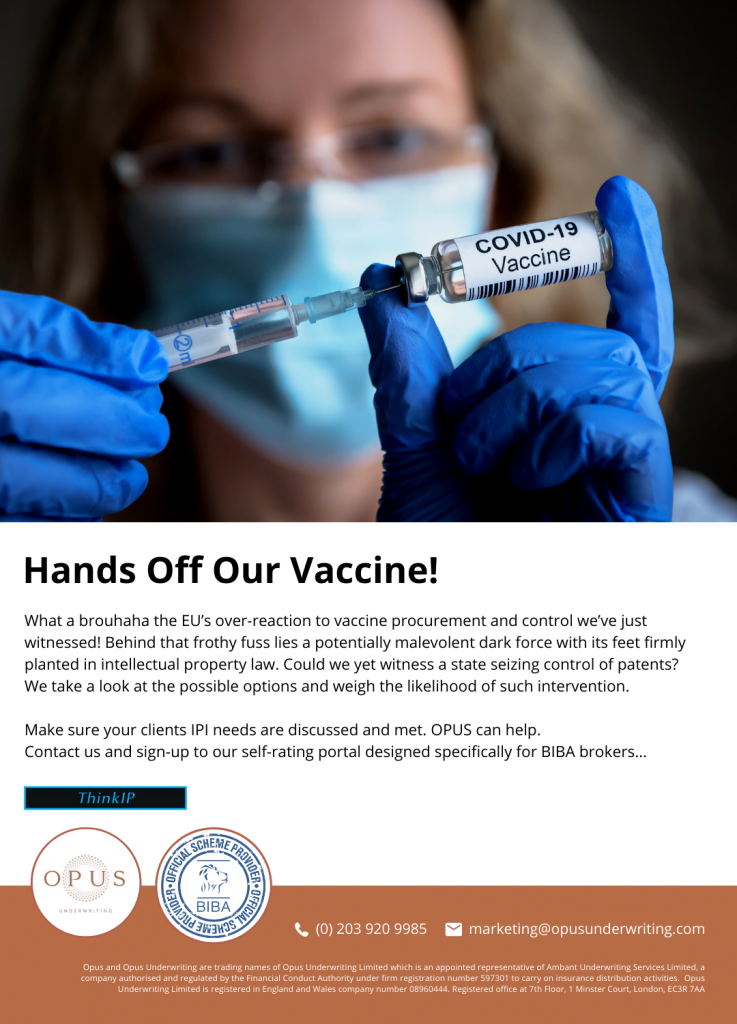 This is Andy Warhol and it’s take one

The time has come